The Jubilee Bank Holiday Meet arrived with a mixed weather forecast typical of any extended British public holiday. However, 20 of us made this the best attended meet of the year, so far! The early birds were on site by mid-afternoon, allowing Martin & Sid a good afternoons climbing on Tryfan Fach. The rest of the Friday arrivals pitched up throughout the late afternoon & evening, with those who had to work & then brave the weekend traffic needing to pitch their tents under the cover of darkness. Fortunately everyone made it to the pub by last orders, which were never knowingly called by the landlord for the entire weekend, allowing those brave souls amongst us to try the draught Hobgoblin. 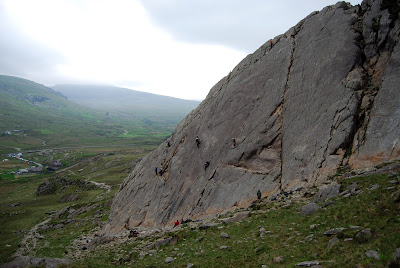 Saturday morning brought good weather & once the effects of the Hobgoblin and previous days travel had worn off the day started in traditional SMC time. A climbing group headed to Tryfan Fach and enjoyed a good day’s multi-pitch trad climbing, which for some was their first experience of climbing outdoors & also of multi-pitch climbing. We headed back to the cars just as the weather was closing in & the midges had run out of places to bite us on! The others enjoyed a good days walking & scrambling , taking the Tryfan North Ridge then up onto Bristly Ridge & finally a more leisurely walk along The Glyders and back down in to the Devils Kitchen. We then all met back in the pub that evening for some good food & even better Hobgoblin. 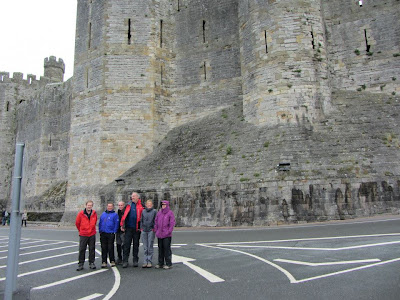 Sunday came along with the promised rain that had been doing its worst for most of the night, and once 'rain stopped play' was declared most of the group then headed to Pete’s Eats for brunch (2nd breakfast for some!). Upon return, the Sunday arrivals keen to stretch their legs mustered enough support for a local afternoon hillwalk & to road test their wet weather gear. The rest of us headed for Caernarfon along with the rest of North Wales, and after looking at the queues for the castle in the rain all ended up in The Black Boy for a late lunch and a pint of something that wasn’t Hobgoblin. Returning to the campsite and seeing the walkers returned safely, we became bored of counting midge bites and so made our way to the warm and dry of the local for some liquid carb-loading for the good weather promised for the next day. 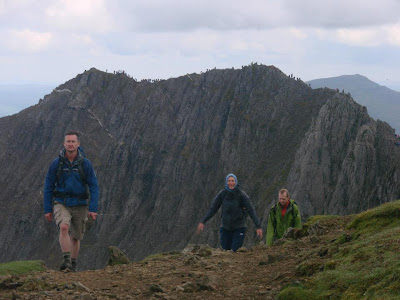 Monday arrived with the promised good weather, so had the campsite midges! Therefore, several groups left the site early to make the most of the day. The first group successfully tackled The Snowdon Horseshoe in good time, whilst a second group set off for The Glyders circular walking route. The main climbing group went to Hollyhead Mountain and enjoyed a great day’s climbing returning with tales of climbing up an elephant’s bottom! ...maybe the Hobgoblin talking!? Finally, Martin took Tracy to The Gribbin Facet and lead 'Slab Climb' before sending her traumatised back down the M6. Good weather, a successful day out & high spirits lead to an impromptu late afternoon drink or few, followed by an instantly regrettable game of rugby thanks to George, 4 bottles of wine, a slug of Pernod & Dave’s secret stash of Sloe Gin! Somehow we all managed to follow our noses to the pub for dinner, only to find out that we had drunk the pub dry of Hobgoblin over the weekend! …only after a member who shall remain nameless had the last pint!
The rain promised for Tuesday morning arrived and then fizzled out, allowing those who wanted to make the most of the weekend a leisurely walk up Snowdon’s Watkins Path to the waterfalls. Why one member felt it necessary to wear his bright yellow B3 mountain boots for this route is best known to him… although leaving your regular walking boots out overnight in the rain might explain his lack of footwear! The rest of us packed up & started the long journey home after what was a thoroughly enjoyable and successful weekend. 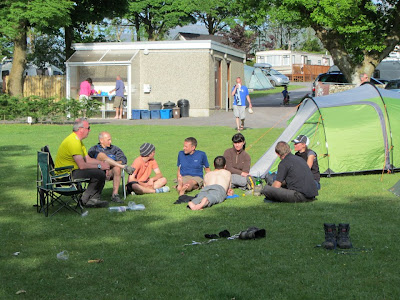 Huge thanks to all those who attended and made this meet such a success, no doubt several Annual Dinner Awards were earned. If you have any good photos of the weekend and are on Facebook please feel free to add them to the SMC group. I passed on our thanks and compliments to the campsite owners, who were equally as complementary about our group and would be happy to welcome us back again next year and have promised to scare the midges away. The Glyntwrog Inn has also asked for advanced warning of our return so they can get in an extra barrel of Hobgoblin and warn the Coastguard!